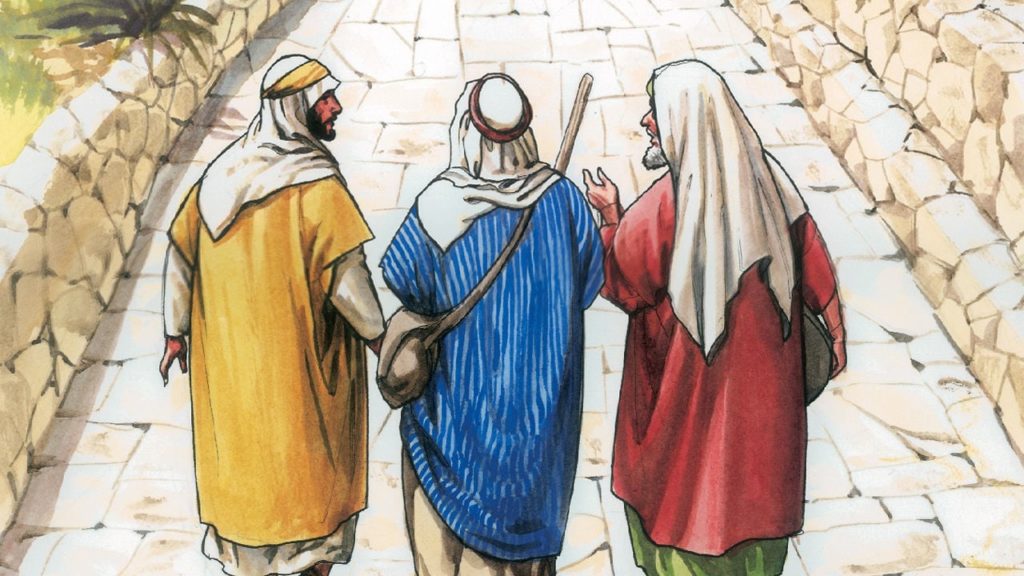 The Road to Emmaus runs west from Jerusalem and is some six or seven miles long. It is a short, but a remarkable journey. While traveling this road, Jesus reveals Himself to a traveler.

On the first Easter Sunday afternoon, two disciples went west from Jerusalem into the sunset unknowing that soon they would be returning to Jerusalem. As they journeyed, they discussed Jesus’ crucifixion three days earlier. Two things about the crucifixion perplexed them:

The two travelers possessed faith, although weak, caused by despair over Christ’s death. Events were not happening the way they expected. Soon the travelers were joined by another traveler who asked about the problem they were discussing. Jesus, whom they did not recognize, began to explain the scriptures to them (v.27).

27 Then beginning with Moses and all the Prophets, He interpreted for them the things concerning Himself in all the Scriptures.

Beginning with Moses and all the Prophets. Meaning the entire Old Testament. They had believed the prophets but had not understood “all” that they had said. The promises of Lordship and glory for the Messiah were there, but so were the assurances that suffering lay in the path to glory.He interpreted. Revealed to them. Jesus reintroduced them to all the prophecies of the Suffering Servant. Even now, the two disciples were so preoccupied with the negative news of the day that they failed to see the Good News was walking with them.

28 They came near the village where they were going, and He gave the impression that He was going farther.

was going further. He would go further. Suppose they had let him go on: How often have people let Him go away.

29 But they urged Him: “Stay with us, because it’s almost evening, and now the day is almost over.” So He went in to stay with them.

they urged Him. Insisted. Jesus stands at the door and knocks. But only when invited, will He enter.

30 It was as He reclined at the table with them that He took the bread, blessed and broke it, and gave it to them.

He took the bread. The host and not the guest usually did this. Four action steps, took, blessed, broke, and gave. Reminiscent of the Last Supper where Jesus “took bread and broke it, and gave it to them (the disciples), saying, “This is My body which is given for you; do this in remembrance of me” (Luke 22:19).

31 Then their eyes were opened, and they recognized Him, but He disappeared from their sight.

their eyes were opened, and they recognized Him. The revelation was complete.

All believers travel the Road to Emmaus. Some disappointed and disillusioned, others to ponder and contemplate, others earnestly seeking answers. The risen Lord wishes to reveal Himself to all travelers. But just as with the two disciples on the original road to Emmaus, Jesus awaits an invitation.  It is essential to ask for continuing fellowship and revelation. We must desire to “see” the risen Lord. He will reveal Himself as we study the Bible, worship, sing, fellowship and carry out His commands.

Travelers on the Road to Emmaus who invite Jesus to continued fellowship are rewarded with revelation and step forth to the next road— The Road to Damascus.