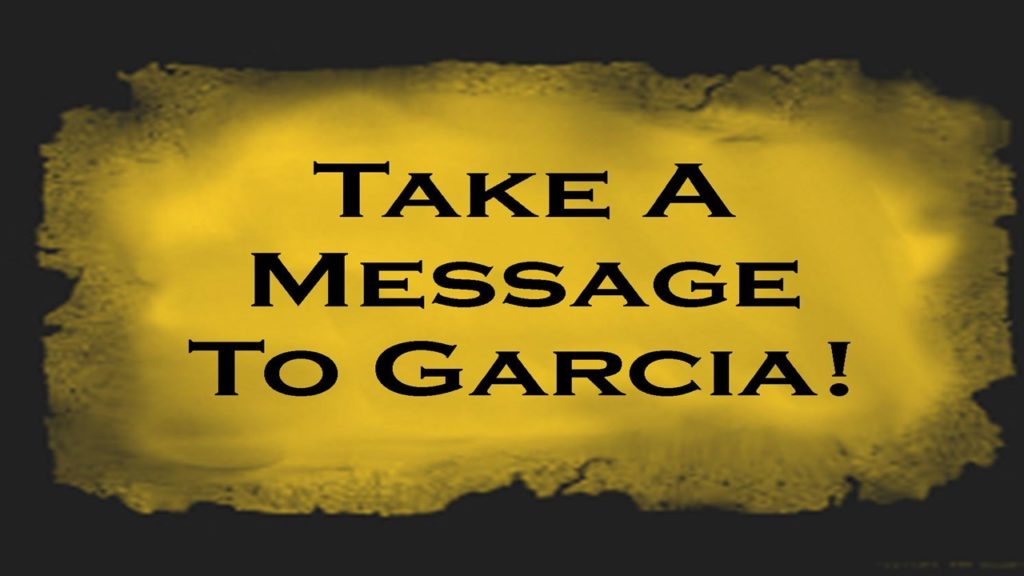 The inspiring story of A Message to Garcia is the story about Colonel Andrew Summers Rowan, who, when the Spanish-American War broke out, was a young lieutenant in the United States Army. They chose Rowan to deliver a message from President McKinley to General Calixto Garcia, the leader of the revolutionary forces.

Author Elbert Hubbard set the stage for the drama that followed by writing in his 1899 essay, “Garcia was somewhere in the mountain vastnesses of Cuba — no one knows where. No mail or telegraph message could reach him. The President must secure his cooperation and quickly.”

Lieutenant Rowan held the lowest commission rank in the Army. By having his name suggested to the President, Lieutenant Rowan received the ultimate commendation, “If anybody can find Garcia, it’s Rowan.”

After receiving his instructions to carry the message to Garcia, Lieutenant Rowan shook his commander’s hand.  And without asking one question, he sailed to Cuba with no other help and no other directions than to deliver the President’s message.

With only the help of native guides provided by Cuban patriots, Rowan made his way into the mountains of the interior and delivered his message to Garcia. The Lieutenant faced many obstacles. As the author of this essay, Elbert Hubbard writes, “It was the sheer courage, and indomitable spirit of the young lieutenant was at the heart of the accomplishment of his mission.”

Elbert Hubbard penned A Message to Garcia over 100 years ago. Over 40-million copies have been sold, and they have translated it into 37 languages making it one of the highest selling books in history. Maybe the message of this “old” essay is a new message for change.

Are you a Rowan? When asked to carry out a task, do you deliver? Do you do more than expected? Are you one of the rare individuals that can take a message to Garcia?  Or, are you a non-Rowan with a victim mentality asking a lot of questions and offering a litany of excuses?