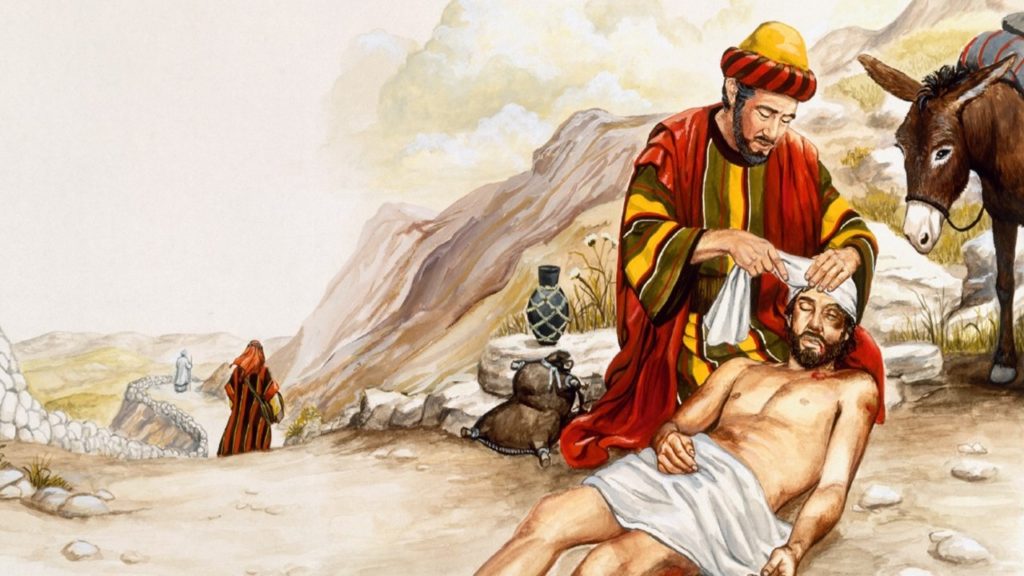 30 Jesus took up [the question] and said: “A man was going down from Jerusalem to Jericho and fell into the hands of robbers. They stripped him, beat him up, and fled, leaving him half dead. (The victim was recklessly and foolishly traveling alone; an ideal target for the robbers).

31 A priest happened to be going down that road. When he saw him, he passed by on the other side.

32 In the same way, a Levite (assisted the Priests in the work of the temple), when he arrived at the place and saw him, passed by on the other side.

33 But a Samaritan on his journey came up to him, and when he saw [the man], he had compassion.

34 He went over to him and bandaged his wounds, pouring on oil and wine. Then he put him on his own animal, brought him to an inn, and took care of him.

35 The next day he took out two denarii, gave them to the innkeeper, and said, ‘Take care of him. When I come back I’ll reimburse you for whatever extra you spend.’

36 “Which of these three do you think proved to be a neighbor to the man who fell into the hands of the robbers?”

Jesus question: “Which of these three do you think proved to be a neighbor to the man who fell into the robbers’ hands?” The lawyer answered, ‘The one who showed mercy toward him.’ “Jesus said to him, ‘Go and do the same.’”

As you travel this week on your Jericho Road, be sensitive to opportunities to express compassion for a neighbor. Remember Jesus said, “As you have done it unto the least of these you have done it unto Me.” Jesus taught that love is revealed by action. Loving God is faith. Loving our neighbor is faith in action. Expect the Holy Spirit to empower you. The Spirit waits for your invitation. When you care, the power to share is released.

This story is not about a victim, it’s a story about the power of love and caring. And, there is no greater act of love than sharing the Gospel—the Good News.

All roads lead to Jericho; all roads also fan out from Jericho. Jesus said, “But you will receive power when the Holy Spirit comes on you, and you will be my witnesses in Jerusalem, and in all Judea and Samaria, and to the ends of the earth” (Acts 1:8).