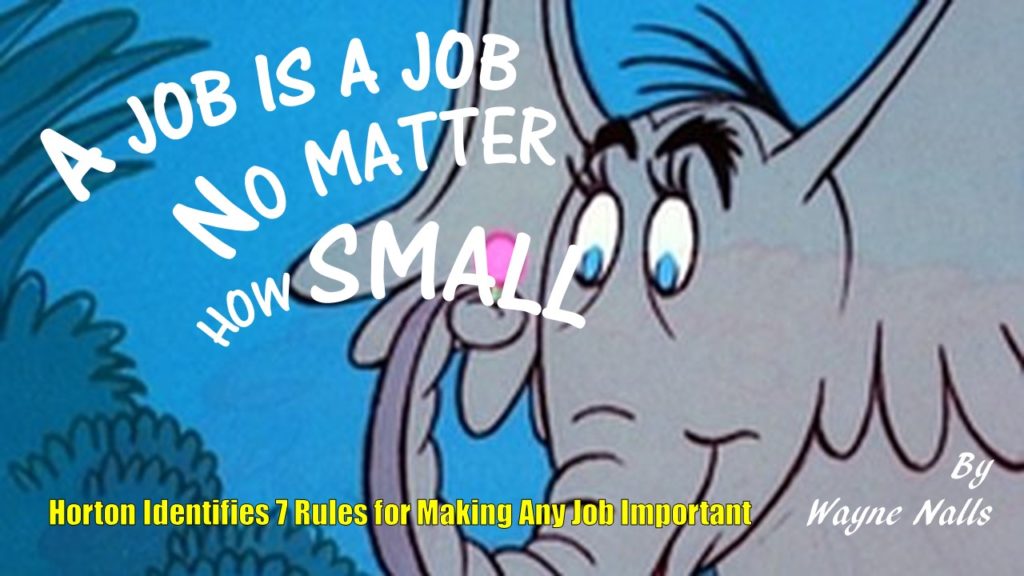 There’s a classic children’s book “Horton Hears a Who!” that offers vital lessons every professional should learn. The theme of the book, written and illustrated by Theodor Seuss Geisel under the pen name Dr. Seuss, is “a person’s a person no matter how small.”

You’ll pardon me for playing off the title of the book and borrowing some fantastic personal success ideas from the hero of the book, Horton the Elephant. Horton lives in the jungle with the other animals.

While enjoying himself splashing in a pool, Horton hears a sound coming from a speck of dust. Puzzled by the noise, Horton leans in to listen and discovers that the sound is the voice of the Mayor of “Who-ville” who asks Horton to help save his small planet and city. Horton agrees to help the Mayor and protect the “Whos” from the imminent harm they are facing.

It’s funny how quickly when Horton agrees to help that he encounters the Law of Good Deeds: “No good deed goes unpunished.” The other animals in the jungle confront Horton and refuse to believe the speck of dust is home to a tiny community of people called “Whos.” For the other jungle animals, “Who-ville” doesn’t exist if they can’t see or hear it. The unknown makes people feel insecure and uncertain. The story reveals that the other animals, who, after many attempts to steal and destroy the speck of dust, become convinced there is life on the speck when they hear a loud noise from the “Whos.” Once convinced of the “Whos” existence, the other jungle animals vow to help Horton protect the tiny community.

You achieve the big job you want by taking small steps over time in more minor roles. Here are six small steps that, taken over time, lead to the achievement of your big goal.

The bottom line is not, is the job small. But, are you willing to make it a stepping stone to a more significant role?