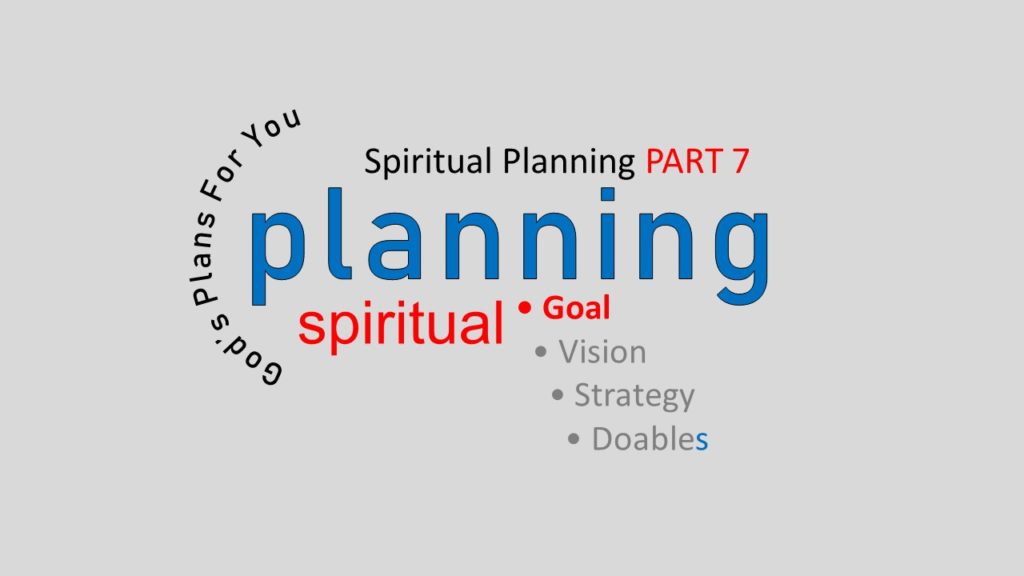 Goal setting is a formal process of planning—business or personal. By setting goals and developing a plan of action (POA) you decide what you want to achieve and the step-by-step moves towards the achievement of your goals. Setting goals provides four benefits:

As used here, “Spiritual Goals” define the spiritual targets or spiritual aspirations toward which effort is focused or directed. Spiritual goals are what you, under the guidance of the Holy Spirit, dedicate your life to in a powerful and compelling way.

Accomplishing Your Goals Benefits You

When God made His decision to destroy the earth, He spoke to Noah and said, “Make for yourself an ark of gopher wood” (Genesis 6:14a). Noah’s goal was to build an ark so that he and his family would not die when the flood covered the earth.

Accomplishing Your Goals Benefits Others

By achieving goals, Christians not only perform the tasks God has assigned them but, they often benefit others as a result of their success. In the Old Testament, God spoke to Moses out of the burning bush and told him to go to Pharaoh so that you may bring My people, the sons of Israel out of Egypt. God desired to use Moses to free his people from the oppressive hands of the Egyptians.

In revealing his true identity to his brothers, Joseph told them to fear not because “God sent me before you to preserve for you a remnant on the earth and to keep you alive by a great deliverance” (Genesis 45:7). In becoming the second in command in Egypt, Joseph was able to provide for his Father and brothers during the time of famine.

Accomplishing Your Goals Benefits You and Others.

Jesus called his first two disciples, Peter, and Andrew, and gave them a goal, “Follow Me, and I will make you fishers of men” (Matthew 4:19). As a result of following Jesus, Peter became a “rock” in the early church, and Andrew invested his life in bringing others to Christ.

In accomplishing his goal, Ananias of Damascus is remembered as the man who baptized Saul. Ananias’ goal was to “Arise and go to the street called Straight, and inquire at the house of Judas for a man from Tarsus named Saul, for behold, he is praying, and he has seen in a vision a man named Ananias come in and lay his hands on him, so that he might regain his sight” (Acts 9:11, 12). But, in accomplishing his goal, Ananias benefits others because God said that Saul was a “chosen instrument of Mine, to bear My name before the Gentiles and kings and the sons of Israel” (Acts 9:15). The Christian community benefits from Ananias achieving his goal.

The Roman centurion Cornelius, his relatives, and close friends experienced salvation because Cornelius responded to God’s command to “dispatch some men to Joppa, and send for a man named Simon, who is also called Peter” (Acts 10:5).

Accomplishing Your Goals Has Eternal Consequences

Believe on the Lord Jesus Christ and be saved is life’s most important goal. Attain this goal, and you will live in heaven with God for eternity.