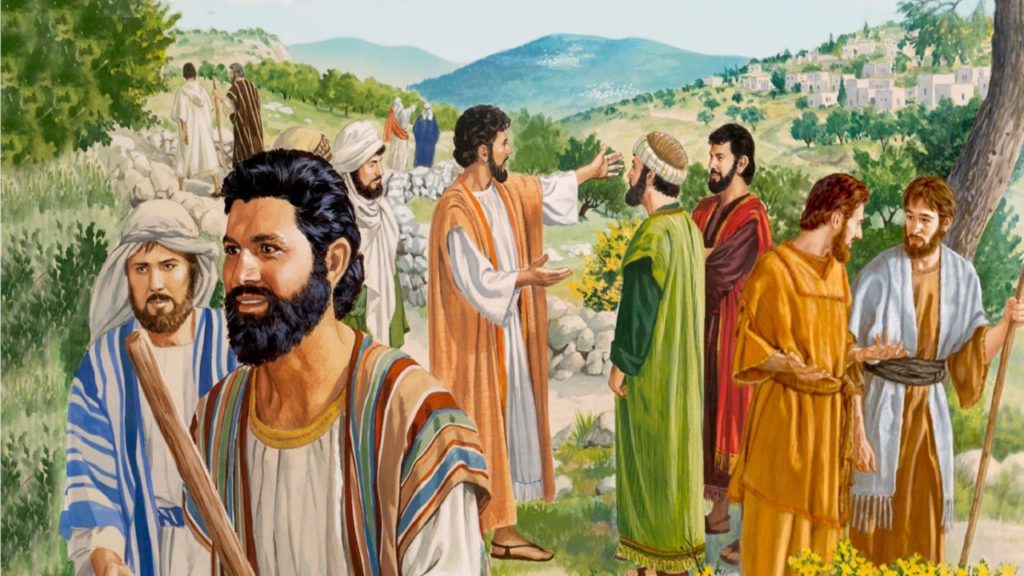 The magazine, Christianity Today, estimates the population of Palestine in Jesus’ day was approximately 500,000 to 600,000 (about that of Fresno, Tucson, Boston, or Louisville).  About 18,000 of these residents were clergy, priests, and Levites. From this population, Jesus selected 12 men to mentor, and personally train, and equipped to carry out His work on earth after he returned to Heaven.

In his gospel, Mark writes, “Jesus went up into the hills and called to him those he wanted, and they came to him. He appointed twelve—designating them apostles—that they might be with him and that he might send them out to preach and to have authority to drive out demons (Mark 3:13 – 15).

Jesus selected people who were busy at work, and He sought them out. Walking by the Sea of Galilee, he saw two brothers, Simon called Peter and his brother Andrew. There were casting a net into the lake, for they were fishermen. “Come, follow me,” Jesus said, “and I will make you fishers of men´(Matthew 4:18 – 21). The Bible says a little later, Jesus saw two other brothers, James son of Zebedee and his brother John who were also fishermen, and He called them; and they followed.

Another disciple Jesus called to leave his work and follow him is Matthew. The selection is recorded in his Gospel (Matthew 9:9).  “As Jesus went on from there, he saw a man named Matthew sitting at the tax collector’s booth. ‘Follow me,’ he told him, and Matthew got up and followed him.”

It is a well-known fact, when leaders develop other leaders, each leader multiplies their usefulness. Jesus used this principle for the personal development of the men who He called to be His disciples.

People can increase their leadership capability by learning from other successful leaders. Here are five Jesus leadership lesson that can be applied by anyone.

A starting point in training is developing leaders who can grow a select group of people by enabling them to learn through modeling, training, testing and providing feedback.

A good leader follows a few principles in selecting, training, and developing his/her team. Jesus was an excellent leader, and He knew He would be on earth only a short time (33 years), and He must select and surround Himself with the right people. His success depended on the effort of others.

Jesus proved Himself the real leader in that He did the things He was uniquely sent to do and let the disciples do theirs. The five keys to Jesus’ leadership are: Select, Model, Train, Test, and Provide Feedback.

13 And he goeth up into the mountain, and calleth unto him whom he himself would; and they went unto him.

14 And he appointed twelve, that they might be with him, and that he might send them forth to preach,

Jesus was committed to His team. He led by example. He is the role model of everything He wants to happen in His disciple team. He never expects His team to do what He would not do.

The principle of setting an example for team members is incredibly important for developing effective disciples.  Mark says in his Gospel, “Jesus called them together and said, “You know that those who are regarded as rulers of the Gentiles lord it over them, and their high officials exercise authority over them. Not so with you. Instead, whoever wants to become great among you must be your servant, and whoever wants to be first must be the slave of all. For even the Son of Man did not come to be served, but to serve, and to give his life as a ransom for many” (Mark 10:42-45).

Leaders are students of life-long learning. They search and absorb lessons that the Bible teaches. They model those leadership trait’s that Jesus taught plus the traits of the other great men and women of the Bible and history.

Next week, we continue with the other three keys to Christian leadership: Train, Test, and Feedback. The minute you chose to be a learning disciple, you choose to be in the people business because our Leader came to seek and save lost people. Jesus declared, “And the lord said unto the servant, Go out into the highways and hedges, and compel them to come in, that my house may be filled.”(Luke 14:23).