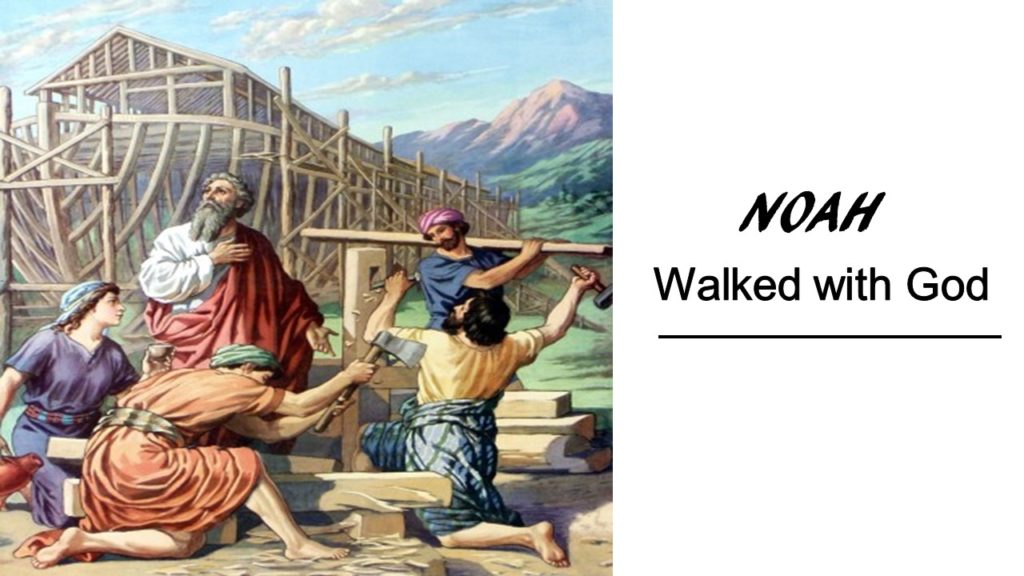 Continued from last week… Enoch, who lived before the flood lived a life later defined by Micah in 735 B.C. Micah 6:8, “He has told you, O man, what is good and what it is the Lord requires of you: Only to act justly, to love faithfulness, and to walk humbly with your God.

The second man of faith who had the privilege and honor of walking with God was Noah.

In the beginning, God said Adam and Eve, “Be fruitful, multiply, fill the earth, and subdue it” (Gen. 1:28b). But, before they carried out God’s instructions, Adam and Eve disobeyed God and committed the first sin. From that original sin, until the time of Noah (the ninth descendant from Adam via Seth), sin spread on the earth. “When the Lord saw that man’s wickedness was widespread on the earth and that every scheme his mind thought of was nothing but evil all the time. -Gen. 6:5.

Scripture records, “the Lord regretted that He had made man on the earth, and He was grieved in His heart. Then the Lord said, “I will wipe off the face of the earth: man, whom I created, together with the animals, creatures that crawl, and birds of the sky, for I regret that I made them.” Noah, however, found favor in the eyes of the Lord.” These are the family records of Noah. Noah was a righteous man, blameless among his contemporaries; Noah walked with God” (Gen. 6:6-9).

God spoke to Noah when he was 600 years old and said, “Understand that I am bringing a deluge-floodwaters on the earth to destroy all flesh under heaven with the breath of life in it. Everything on earth will die. But I will establish My covenant with you, and you will enter the ark with your sons, your wife, and your sons’ wives” (Gen. 17, 18).

With the promise, “I will establish My covenant with you,” Noah, the grandson of Methuselah, and his family were chosen to carry out the command God gave to Adam and Eve, “Be fruitful, multiply.” Because Noah found sight in the eyes of the Lord, he was tasked to perpetuate life on earth and humanity was given a second chance. Although Adam was the father of humankind up to the flood, Noah is the second father of humankind.

Noah walked with God, not because he merited the privilege, but God extended him unmerited grace. Because of this same unmerited grace, you and I can live in a close, personal relationship with God, if we, like Noah, exhibit these characteristics:

Scripture says that after Noah had finished building the ark God commanded him to, “Enter the ark, you and your family; for you alone, I have seen to be righteous before Me in this time” (Gen. 7:1). Through his life of goodness and holiness, Noah saved himself, his family and two of every living creature that was upon the face of the earth from the Flood. Because Noah walked with God before the Flood, he would walk with Him after the Flood.

Noah got it right. Before the flood, Adam and Eve and all their descendants got life wrong. The perfect paradise God intended was defiled by all humankind, except for Noah and his family. The population forgot righteousness, faithfulness, and the worship of one God. Noah found grace in the sight of the Lord because he had a personal, daily relationship with the great I AM.

After the Flood, God instructed Noah to, “be fruitful and increase in number; multiply on the earth and increase upon it” (Gen. 9:7). (Cp Gen. 1:28). Noah did as God commanded and his offspring (the people of the repopulated earth)) did as they pleased.

This circle of grace, sin, and destruction reoccurs throughout history. Grace was extended, sin is prevalent, and destruction will come. Matthew, writing in his gospel, prophesized of our times.  “As it was in the days of Noah, so will it be at the coming of the Son of Man. For in the days before the flood, people were eating and drinking, marrying and giving in marriage, up to the day Noah entered the ark” (Matthew 24:37-38).

As the days of Noah, are you living for today only? Will you be surprised by the return of Jesus, despite the frequent warnings and admonitions of the Bible? Are you engaged in the business and pleasures of the world, little expecting, little thinking of Jesus return?

Next week, Levi Walked with God