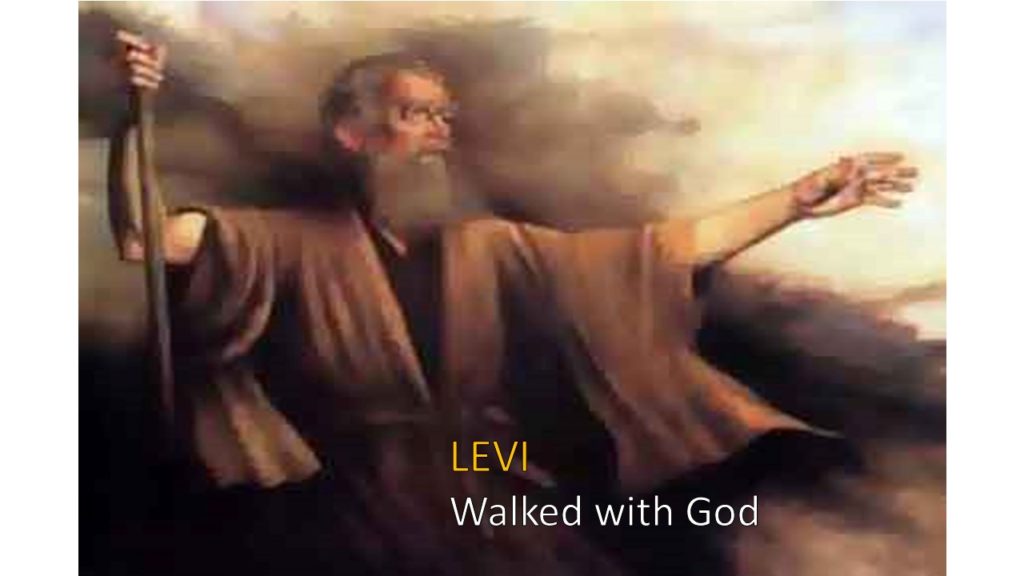 Malachi, the last book in the Old Testament, reveals a third individual who walked with God. In the second chapter, God says, “My covenant with him (Levi) was one of life and peace, and I gave them to him as an object of reverence; so he revered Me and stood in awe of My name. True instruction was in his mouth, and unrighteousness was not found on his lips; he walked with Me in peace and uprightness, and he turned many back from iniquity” (Malachi 2:5, 6).

In these two verses, God reveals six characteristics that equipped Levi to walk with Him.

Although Enoch, Noah, and Levi are the only three individuals mentioned explicitly in the sixty-six books of the Bible as having walked with God, we understand that many other Bible heroes also had a personal, dynamic fellowship with God.

In the New Testament, Luke gives a vivid description of what it means to “walk with God.” In the first chapter of his Book, Luke describes Zechariah, a priest and his wife Elizabeth, “And they were both righteous in the sight of God, walking blamelessly in all the commandments and requirements of the Lord” (Luke 1:6).

To say that this priest and his wife were both righteous and walked blamelessly meant that they loved God and obeyed him. They took His Law seriously. Because Zechariah and his wife lived a righteous and obedient life, God honored their walk with Him by blessing them with the son they had long prayed to have. We know their son as, John the Baptist, the forerunner of Jesus Christ.

The New Testament tells of additional people described as “righteous in the sight of God.”  Among these is a Roman Centurion, Cornelius.  Because of his walk with God, Cornelius saw his family saved. Luke, writing in Acts described Cornelius as, “a righteous and God-fearing man, well-spoken of by the entire nation of the Jews” (Acts 10:22). Cornelius loved God and obeyed him and showed his faith in his love for his neighbors. The Bible says, “Cornelius was a devout man and one who feared God with all his household and gave many alms to the Jewish people” (vs. 2, 3).

These lives reveal that to walk with God; a person must live a life that is obedient and pleasing to God. What type of experience is this? The obedient life is the life that loves God and obeys him. It is a life of commitment and obedience. Just as Zechariah and his wife walked an upright and holy life, and Noah was found to be blameless in God’s eyes, and Cornelius lived a righteous life by proving his love for God through his love for his neighbors. Anyone who wishes to walk with God must walk faithfully with God and keep his commands, which Jesus summed up as Love God and Love your neighbor.

Here are the characteristics of the other two men we studied who walked with God.

How many of these characteristics describe you?