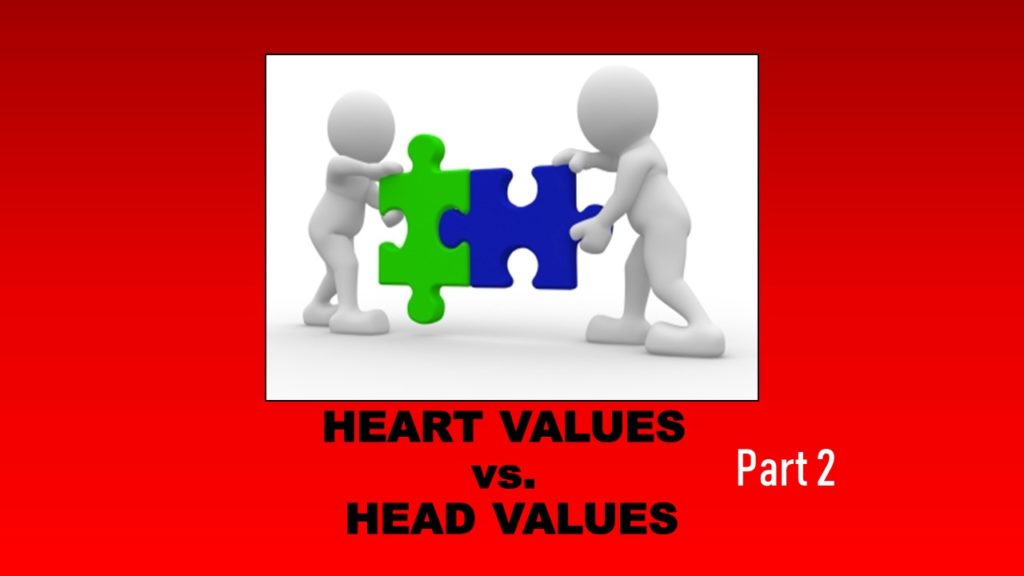 The Bible shows many occasions were actions of the heart contrast with actions driven by the head. Some people do the right thing because it’s the right thing to do. Others make different decisions because the competing decision just makes little sense.

Here are some biblical examples of situations where people exhibited different behavior based on their decision-making source.

Ananias of Damascus may be one of the most underrated disciples in the New Testament. We know little of him. What we know is that he let his heart override his first head decision to not welcomed Saul of Tarsus into God’s family.

Because of his dramatic encounter with Jesus on the road to Damascus, Saul was blinded and commanded to, “rise, and enter the city, and it shall be told you what you must do.” Meanwhile, God spoke to Ananias and commanded him to, “Arise and go to the street called Straight, and inquire at the house of Judas for a man from Tarsus named Saul, for behold, he is praying, and he has seen in a vision a man named Ananias come in and lay his hand on him so that he might regain his sight” (Acts 9:11, 12).

Despite these explicit instructions, Ananias’ first reaction was one of the head. “Lord, I have heard from many about this man, how much harm he did to Thy saints at Jerusalem; and here he has authority from the chief priests to bind all who call upon Thy name” (vv. 13, 14). Ananias reminded God that if these facts were real, he would be in danger if he were to do as instructed. Ananias set out to locate Saul. His motive was to be obedient; an action of the heart.

Widow and Elijah and the Last Meal (I Kings 17)

Elijah’s request of the widow of Zarephath for a jar of water and a piece of bread was met with an answer from the head. “As the Lord your God lives,” said the widow, “I have no bread, only a handful of flour in the bowl and a little oil in the jar; and behold, I am gathering a few sticks that I may go in and prepare for my son and me, that we may eat it and die”  (1 Kings 17:12). Then Elijah said to her, “Do not fear; go do as you have said, but make me a little bread cake from it first and bring out to me, and afterward you may make one for yourself and for your son. For thus says the Lord God of Israel, ‘The bowl of flour shall not be exhausted, nor shall the jar of oil be empty, until that day that the Lord sends rain on the face of the earth.’” (vs. 13, 14)

She responded to her heart. Scripture says, “The bowl of flour was not exhausted nor did the jar of oil become empty, according to the word of the Lord which He spoke through Elijah” (v. 16).

Peter and the Bursting Nets (Luke 5)

In the story of the bursting nets, we learn that obedience—a heart reaction—must overcome logic; a head decision.

After explaining to Jesus that he had been fishing hard all night with no results, Peter, at Jesus’ command to, “Put out into the deep water and let down your nets for a catch”, (Luke 5:4b) said, “but at Your bidding I will let down the nets” (v. 5b). Even though it made little sense to continue to fish—they had fished in those waters all night with no success—Peter did what he knew to be right. He obeyed Jesus.

Because Peter responded from the heart, he and his companion were so successful that their nets broke from the size of the catch.

The Bible has many examples of people doing things that defy logic. And are best described as actions driven by godly values of the heart. For instance, she ignored the logic of the crowd and the possible embarrassment that motivated the woman, with the issue of blood, to reach out and touch Jesus’ cloak and receive healing. Acting on faith, she accomplished in an instant what 12 years of earlier medical care could not. Another example of heart action vs. head action is the woman who anointed Jesus with very costly perfume—the nard could have sold for over 300 denarii and the money given to the poor. In all these examples, the individuals only did what was right, even though it may have been illogical.

Godly Values are not a part of the mind. If they were, we could rationalize away some of the most core values. What rational person would leave comfort and security behind to go to Calcutta to work with poor impoverished people? But, that’s what Mother Teresa did when she responded to her heart and let her core values— love, kindness, and generosity—decide her life’s work.