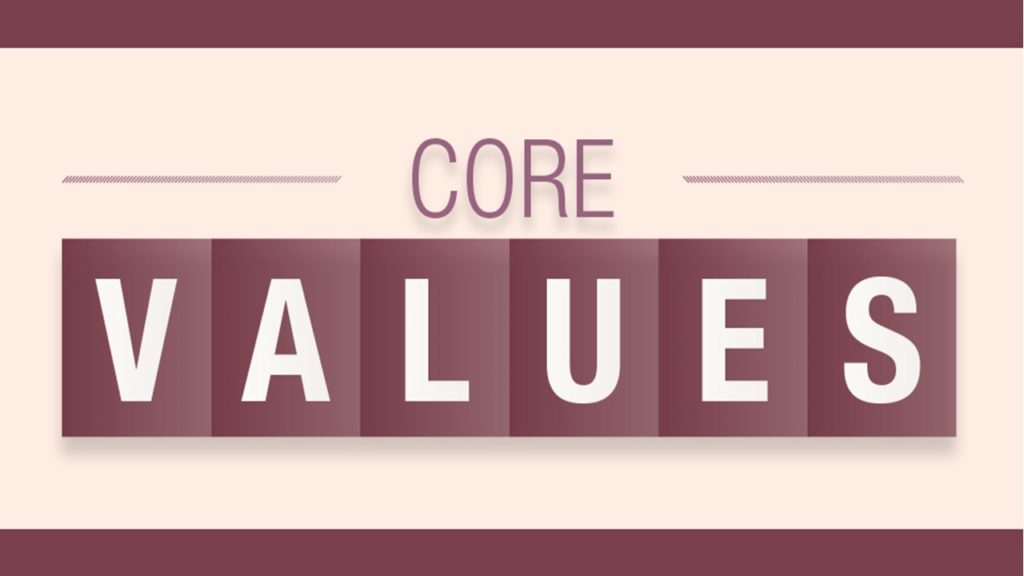 Core Values are our deepest convictions regarding what‘s important—what we prize, treasure or admire. They guide or motivate attitudes and actions and are the fundamental ideals we esteem

There is a connection between the values a person has and the goals and activities they target. When spiritual goals are in line with your guiding values, you invest your time, talents, and possessions in actions helping you accomplish the goals.

The Bible provides many examples of people going to great lengths to avoid compromising core values. One such story involves two events in the life of the prophet, Daniel.

Soon after being carried captive into in Babylon, by King Nebuchadnezzar, Daniel, along with a group of other young men were chosen to serve in the king’s court. The king ordered these manager “trainees” receive instructions in the literature and language of the Chaldeans.

The king provided them with choice food and wine from his table. But Daniel chose not to compromise his values by defiling himself with the king’s food and wine. So, he sought permission from his supervisor to eat only vegetables and drink water.

Daniel’s supervisor granted a test period of ten days. At the end of the period, Daniel and his three friends—Shadrack, Meshach, and Abed-nego—were judged to be healthier than the youths who had been eating King Nebuchadnezzar’s choice food and drinking his wine.

By not compromising his values, Daniel proved himself faithful to His God. This early incident in Daniel’s life was only the prelude to a much greater example of how far one must sometimes go in order not to compromise their values.

This second event is an example of how Daniel acted in harmony with his deep-seated, unshakeable core values. The sixth chapter of Daniel tells how jealous rivals set Daniel up to discredit him with King Darius.

After tricking the king into decreeing that anyone who prayed to any god or man other than the king should be put to death in the lion’s den, Daniel’s rivals set about to entrap him. But even after knowing of the king’s decree, Daniel entered his house and through an open window facing Jerusalem, continued to pray to God three times a day as was his custom.

Daniel’s jealous rivals brought this to the attention of the king and reminded him of his decree that any man who prayed to any god or man other than the king, for thirty days, was to be cast into the lion’s den.

Although King Darius was distressed at the outcome of this situation, he could not rescind his degree. So, Daniel was brought and placed in the lion’s den. A stone sealed the mouth of the cave, and Daniel was left to be the supper for the hungry lions.

Even in the face of death, Daniel wouldn‘t comprise his values. His sentence resulted from not having done something wrong but of having been faithful to his core values. Daniel valued obedience and worship of God more than his life, and his actions reflected those values.

God rewarded Daniel for his faithfulness. During the night, He sent His angel and shut the lion’s mouths, so they did Daniel no harm. Daniel’s behavior, driven by his values saved his life.

A Core Value cannot contradict any of your other Core Values. For example, you can’t value “Self-control” and “Self-indulgence.” Either you will control your passions or you will not. Jesus declared that we couldn’t serve two masters.

Confronted with situations that require action, people react to stimuli that “touch” a core value. When the National Anthem is played, we stand, and as the notes of the Star-Spangled Banner enter our ears, we are moved with pride and patriotism because we value freedom. Seeing a friend in need motivates us to offer help because we value kindness and goodness.