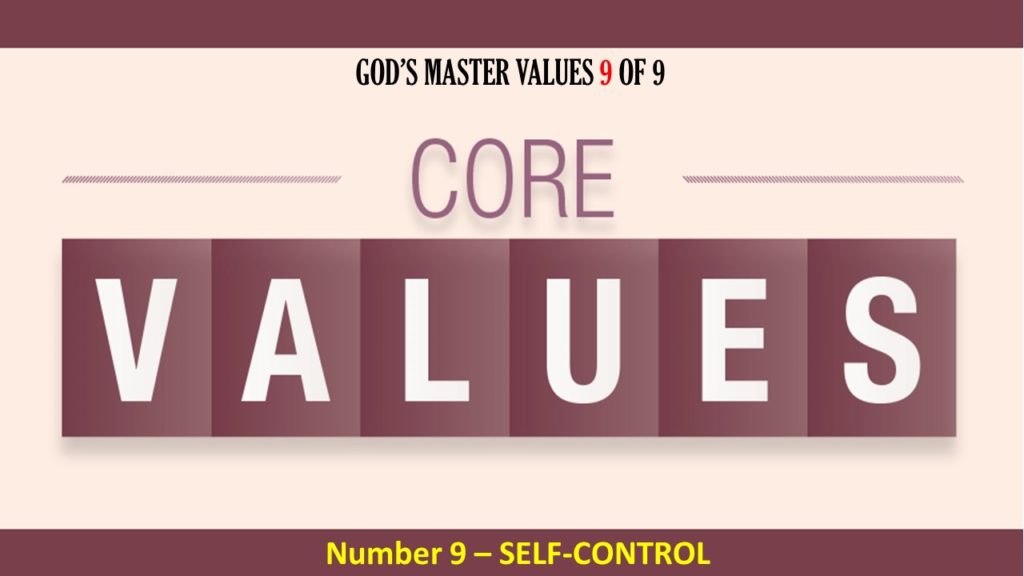 Self-control or temperance is the last of God’s nine Maser Values listed in Galatians 5:22, 23. This Master Value functions well with the other eight values and develops an attitude of strength under God’s control.  In his letter to Timothy, Paul wrote, “For God has not given us a spirit of timidity but of power and love and discipline” (2 Timothy 1:7). We are not to be intimidated or angered. We are to exercise self-control and act out of love.

The story of Joseph illustrates how self-control leads to moral restraint. Joseph, having been sold to a band of Ishmaelites by his brothers, was taken down into Egypt where Potiphar bought him. Because the Lord was with Joseph, he rose to be overseer of Potiphar’s house and in charge of all that his master owned.

Scripture shows that “Joseph was handsome in form and appearance” and that Potiphar’s wife continually attempted to seduce him. But Joseph refused. Though she later falsely entrapped him, Joseph remained faithful to God.

An excellent example of self-control is visible in the death of Stephen. While the crowd, cut to the quick and gnashing their teeth, stoned him, Stephen prayed, “Lord, do not hold this sin against them.” This behavior that can only come from a heart permeated with self-control.

In the tenth chapter of his first letter to the Church at Corinth, Paul gives three guidelines to help rein in our “appetites” and live a life of moral restraint.

1. Is it profitable? Does this action yield beneficial returns? A Christian is to bear good fruit.

2. Is it edifying? Will my actions lead to further spiritual enlighten or improve me? Is my behavior uplifting to others?

3. Is it to the glory of God? Is God honored in this behavior? Are my actions reflective of God’s Master Values?

Speaking of the difficulty of self-control, Aristotle said, “I count him braver who conquers his desires than him who conquers his enemies, for the hardest victory is the victory over self.”

Commit today to acquire the value of SELF-CONTROL

Biblical Example: Joseph is a biblical example of an individual whose walk exhibited Self-control.

Core Values Affirmation: “My daily walk reflects SELF-CONTROL because I am conquering my desires.”

In my walk, I have self-control because God commands I be in control of my temper, my tongue, and my passion for money or power. To achieve my spiritual goal of walking with God, I will abstain from injurious drinks and food and control illicit sensual impulses and desires

Bible Verse: “Like a city that is broken into and without walls is a man who has no control over his spirit.” (Proverbs 25:28).