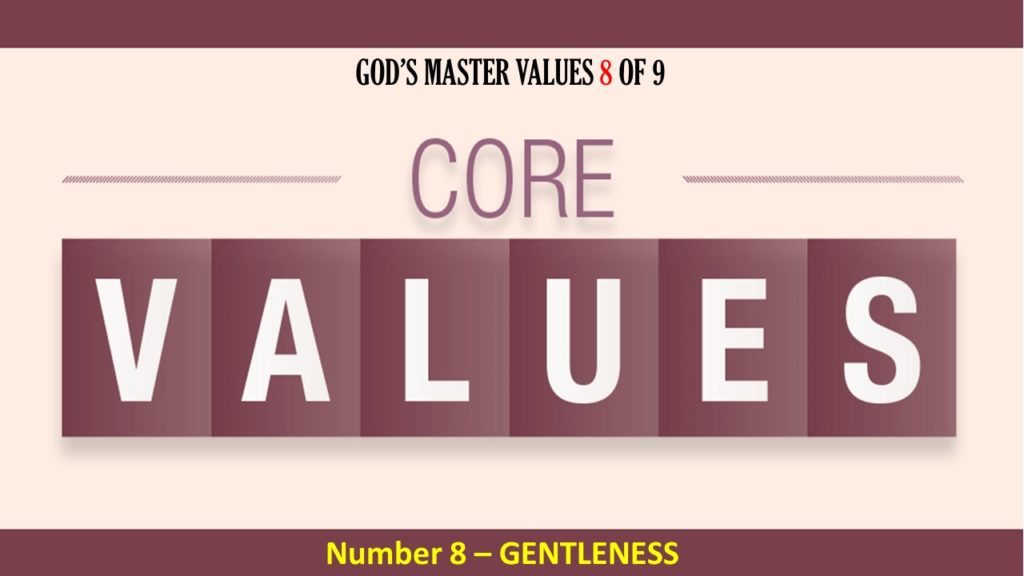 “The gentle are blessed, for they will inherit the earth.” (Matthew 5:5, HCSB).

Few contemporary resumes describe the job seeker as: “gentle,” “meek,” or “humble.” Probably the individual represents himself or herself as: “aggressive,” “self-reliant,” a “go-getter,” and “self-made.” People don’t wish to be thought of as submissive.

Aristotle defined the Greek word translated gentleness (praoes) as the mean between excessive anger and extreme lack of rage, as the quality of the man who is always angry at the right time and never at the wrong time. In His cleansing of the Temple of the money changers, Jesus provided the great example gentleness.

Titus, writing in the seventeenth book of the New Testament gives an excellent definition of “gentleness”: “To malign no one, to be uncontentious, gentle, showing every consideration for all men” (Titus 3:2).

In his letter to the Colossians Paul wrote, “And so, as those who have been chosen of God, holy and beloved, put on a heart of compassion, kindness, humility, gentleness, and patience” (Colossians 3:12). The story Jesus told of the Pharisee and the Publican praying in the Temple shows the sharp distinction between an aggressive, self-assertive man and a gentle, self-effacing man. “ “Two men went up to the temple complex to pray, one a Pharisee and the other a tax collector. The Pharisee took his stand[a] and was praying like this: ‘God, I thank You that I’m not like other people —greedy, unrighteous, adulterers, or even like this tax collector. I fast twice a week; I give a tenth of everything I get.’ But the tax collector, standing far off, would not even raise his eyes to heaven but kept striking his chest and saying, ‘God, turn Your wrath from me—a sinner!’’” (Luke 18:10-13).

Christ describes Himself as gentle and humble in heart (Matthew 11:29).

Commit today to acquire the value of GENTLENESS.