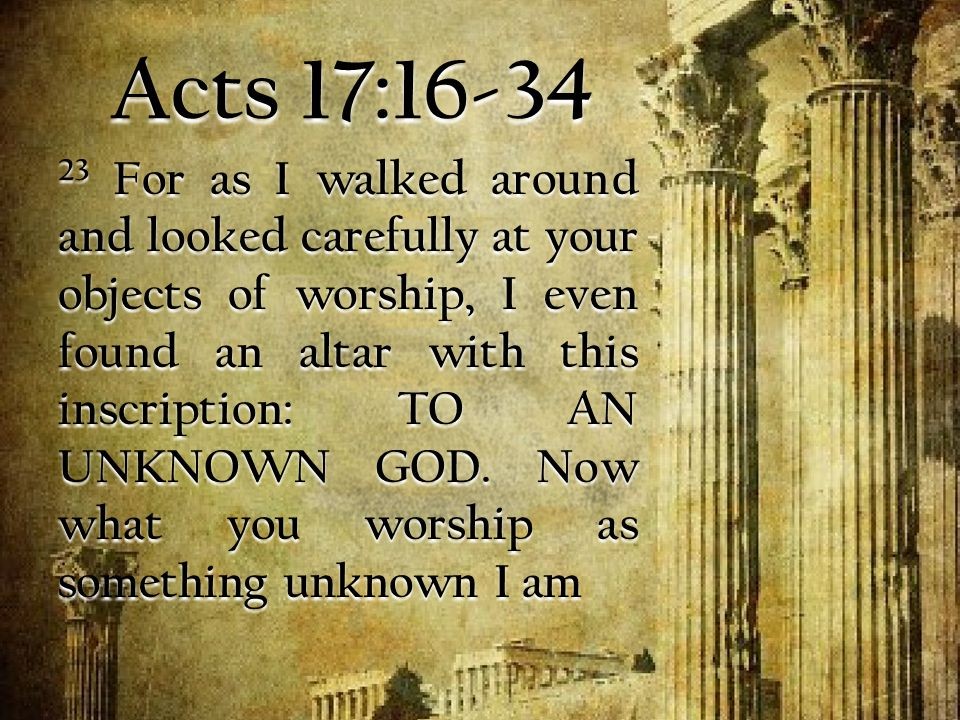 It deeply moved me when I visited the Arlington National Cemetery on the west bank of the Potomac River. There were so many white crosses marking the graves of over 400,000 military personnel, veterans, and their immediate families. My most memorable moment visiting the Arlington National Cemetery was seeing the Changing of the Guard at The Tomb of the Unknown Soldier. The name of the soldier buried in the Tomb is unknown.

Scripture tells the story of an Unknown god who became known.

While in Athens, a stopover point on his third missionary trip, the countless idols of the Athenian gods troubled St. Paul. Petronius (a Roman courtier during the reign of Nero) said that “it was easier to find a god in Athens than a man.”

Paul’s short time in Athens proved to be fruitless. The people considered him a babbling idiot. Paul’s message about Jesus and the Resurrection was unbelievable to the city’s citizens.

The Athenians prided themselves on their endless and aimless discussions and theories regarding life. But Paul’s idea of a God that was crucified, placed in a grave, and three days later rose from the dead was a concept beyond their comprehension. So, they invited him to come to the Areopagus and explain his story further.

Paul’s Areopagus sermon is the most dramatic and fully reported sermon of his missionary career. In his sermon, St. Paul explained to the Athenians that he knew who their “Unknown god” was. (Acts 17:16–34). At the end of Paul’s sermon, many of the crowd left unbelieving, but some joined him and became believers.

Paul passed by the altar to the unknown god. Today, people pass by the unsaved who need to know God. Paul’s sermon on Mars Hill proclaimed, “Therefore, what you worship in ignorance, this I proclaim to you.” (Acts 17: 23, HCSB). As disciples of Christ, we make the unknown known. Jesus commanded us to share the Gospel and the Christ, who is The Known and Living God.