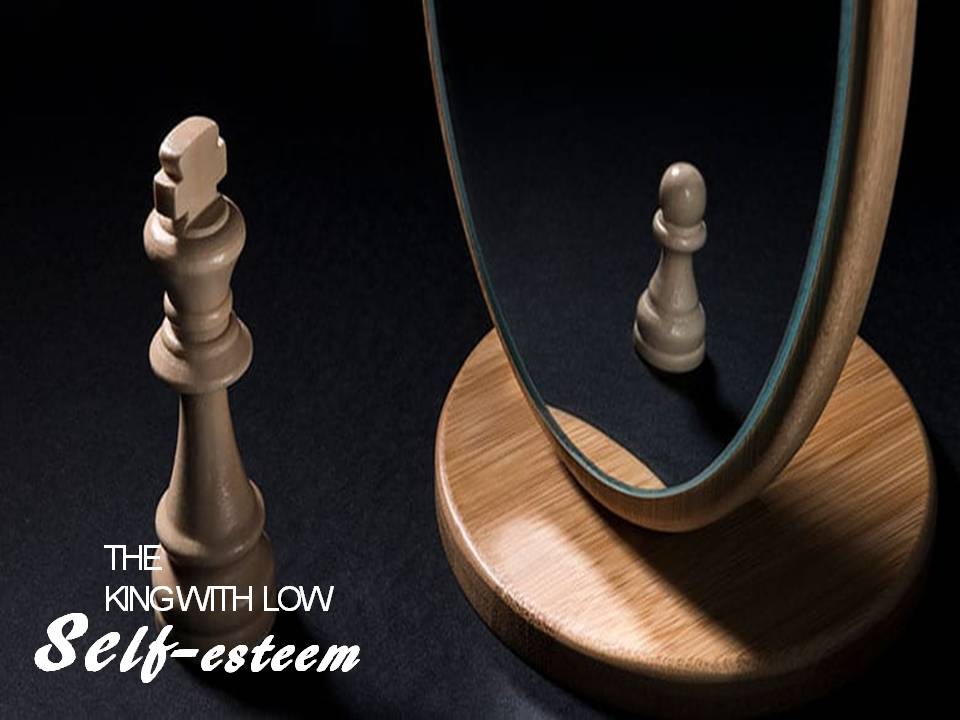 Saul, the first king of Israel, never got past his low self-esteem. He never had confidence in his worth, abilities, and God’s power.

The Israelites demanded Samuel give them a king. Samuel was reluctant to follow their demands until God assured him it was okay and sent Saul to Samuel. Upon meeting Saul, the prophet discovered, “Saul was an impressive young man. There was no one more impressive among the Israelites than he. He stood a head taller than anyone else.” (1 Sam. 9:2)

Samuel anointed Saul as ruler of Israel. God confirmed His choice and said, “He shall save my people from the hand of the Philistines. I have looked upon my people; their cry has come to me. When Samuel caught sight of Saul, the LORD assured him: This is the man I told you about; he shall govern my people.” (1 Sam. 15:16b-17, HCSB)

When Samuel tells Saul he will be king, Saul is suspicious: he was out looking for his father’s missing donkeys. Saul replied: “Am I not a Benjaminite, from the smallest of the tribes of Israel, and is not my clan the least among the clans of the tribe of Benjamin? Why say such things to me?”

Later, when Saul returns home, he doesn’t tell his family about his anointing (1 Samuel 10:16). He hides a secret. Was it because he felt unworthy, or was it because he wanted no part in being the king of Israel? It could be Saul’s low self-esteem.

When Saul became the king, he had everything going for him: God’s chosen one, anointed by the last of the Israelite prophets, no one more impressive among the Israelites.

His assignment is intimidating: his job to unify the 12 tribes into one theocratic monarchy for the first time in the Children of Israel’s history. He also had to defeat the Philistines.

When Saul was about to be declared king in front of the people, he hides in the luggage and has to be dragged into the limelight. The Bible says, “They ran and got him from there. When he stood among the people, he stood a head taller than anyone else. Samuel said to all the people, “Do you see the one the Lord has chosen? There is no one like him among the entire population.” 1 Samuel 10:23, 24 HCSB)

The reluctant “leader” felt he was an imposter caused by a lack of confidence, uncertainty, and fear. He lived with constant anger about his low self-esteem and blamed David for his problems.

A person with low self-esteem often feels poorly about him or herself and must remember God created us, provided us a mission, and equipped us for the mission.