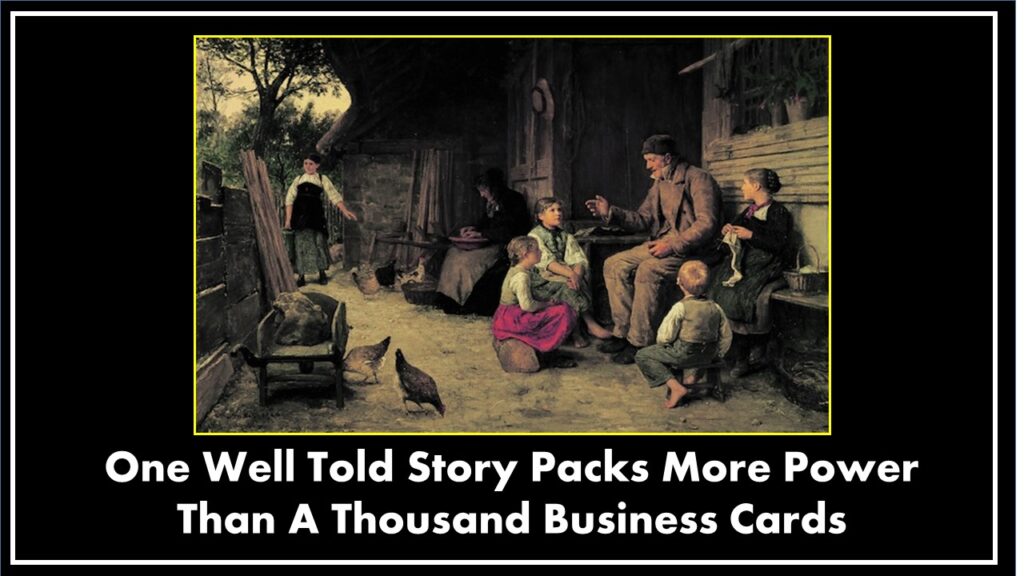 Stories have the power to engage people at a whole new level. A good story is easy to remember because it is a picture painted with words. For example, take the classic tale of the three little pigs who each built their house from different materials. The first pig made his straw; the second pig fashioned his house using sticks, and the third pig used bricks to construct a sound home.

The house constructed of bricks was sturdy and resisted the huffing and puffing of the big bad wolf. When confronted with the wolf, the other two little pigs escaped their easily destroyed houses and found safety in the third little pig’s house of bricks.

A good story conveys a truth or idea. When the two pigs, with destroyed houses, rebuilt, they built with bricks. It was hard work, but, completed, the other two little pigs felt safe and lived a happy life.

I know you didn’t ask, but here are some thoughts on creating a great story. Great storytelling begins with a great story. If you don’t have something worth saying, pass out your business card.

A good story, one that instructs, enlightens, educates, entertains, and motivates has these ingredients.

Attention. Successful storytellers used the first few seconds of their story as a reporter uses a headline to capture the audience’s attention and encourage them to read further.

Present one idea. The goal is to make a point, not points. You want the audience to remember the story. Stay on point.

Resonate with your audience. Good stories engage people’s emotions. The story is believable, and people quickly connect with you and the story.

Memorable. Good stories are memorable and like a good wine, get better over time. Listeners retell your story to others, thereby expanding the outreach of the story and broaden your influence. One good story told to an audience gains you more recognition than a business card handed out to 1000 people.