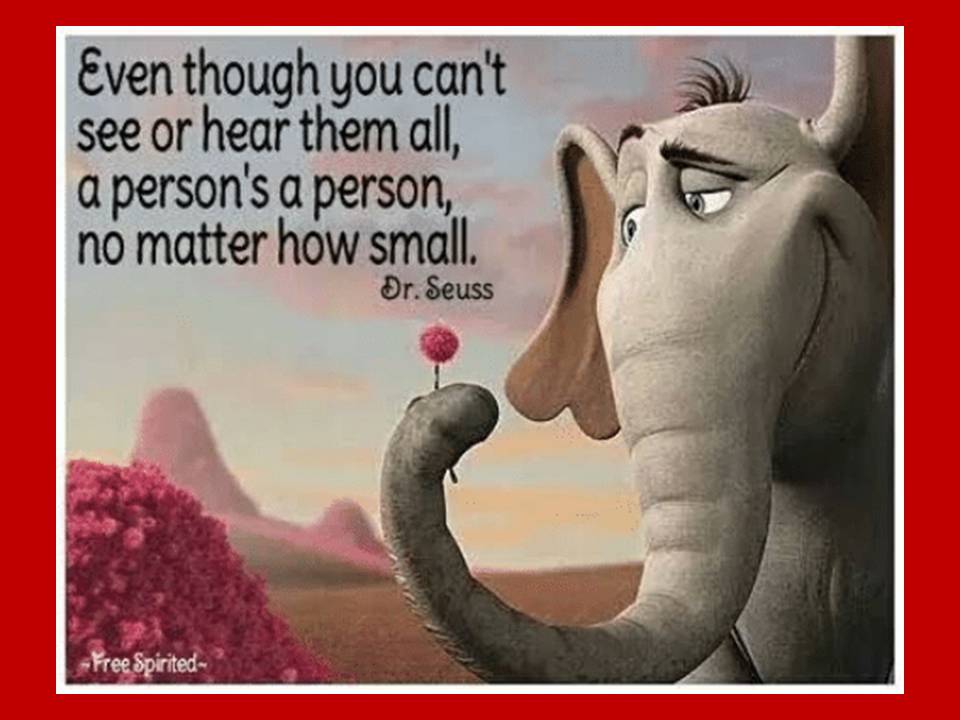 Dr. Seuss’ book, “Horton Hears a Who,” Horton, an elephant, is the only one who hears an entire tiny city of people (Whoville) inside a speck of dust on a flower.

Horton vows to protect the speck, declaring, “A person’s a person, no matter how small.” Horton is the connector for the little Whos and the people who live in the Jungle of Nool. By taking a positive stance, Horton promotes a lesson of speaking out and being involved—one that we should learn.

The Old Testament has a story of a young Israelite slave girl serving in the house of a Syrian general named Naaman. The young girl was captured in a raid and taken back to Syria to serve General Naaman’s wife. She liked Naaman and his wife. But Naaman was a leper.

The young servant girl, a “Horton” with no credentials, went to her mistress and said, “If only my master would go to the prophet who is in Samaria, he would cure him of his skin disease.” So Naaman told his master what the girl from the land of Israel had said. Therefore, the king of Aram said, “Go, and I will send a letter with you to the king of Israel.” (2 Kings 5:4, 5, HCSB)

When Elisha heard the king was distressed by Naaman’s appearance before him, he sent the king a message, “Why have you torn your clothes? Have him come to me, and he will know there is a prophet in Israel.”

When Naaman came to Elisha, he instructed him to wash seven times in the Jordan River, and he did. He became clean. This story has many teaching points: miracles, disobedience/obedience, faith, and mercy. But there’s an essential point people often miss. There would be no story had the young slave girl thought of herself as too small to help. (2 Kings 5)