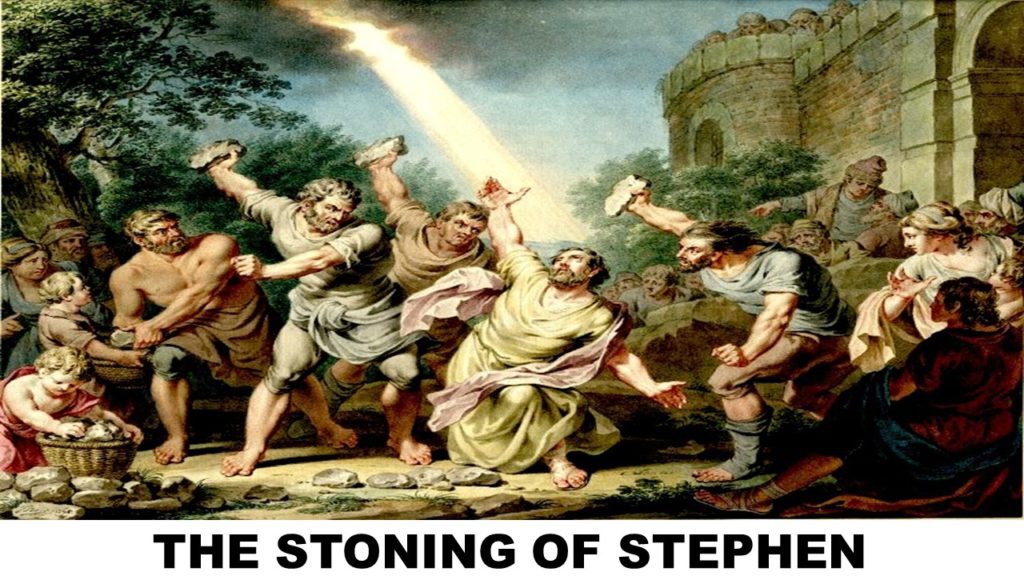 The story of the first Christian martyr, Stephen is important because it was the first step in expanding Christianity out of Jerusalem into a wider circle and eventually, to all the world.

Stephen, who was one of the seven chosen to help in the daily distribution of the daily food to the Hellenistic Jewish widows who had complained they were being overlooked and the Hebraic Jewish widows were given priority at their expense. This happened as the number of the disciples was multiplying. The Twelve disciples determined It would not be right for them to give up sharing the Good News to wait on tables.  Therefore, they had the people select seven men of good reputation, full of the Spirit and wisdom, which they appointed to this duty.

In chapter 6, verse five, we see the hand of the Lord at work. “The proposal pleased the whole company. So they chose Stephen, a man full of faith and the Holy Spirit, and Philip, Prochorus, Nicanor, Timon, Parmenas, and Nicolaus, a proselyte from Antioch.

Stephen waited tables and began to preach (the most extended sermon recorded in Acts) that Jesus superseded the rites commanded by Mosaic Law. His opponents brought Stephen before a Jewish judicial on the charge of speaking blasphemous words against Moses and God!”

12They stirred up the people, the elders, and the scribes; so they came up, dragged him off, and took him to the Sanhedrin.

13They also presented false witnesses who said, “This man does not stop speaking blasphemous words against this holy place and the law.

14 For we heard him say that Jesus, this Nazarene, will destroy this place and change the customs that Moses handed down to us.”

Stephen was given an opportunity to answer the charges. Instead of defending himself, Stephen offered proof that the Jews had always resisted and rebelled against God (See Acts 7:2-53).

This message failed to impress his opponents, they dragged him outside the city and stoned him to death. His last words are found in, v. 59. They were stoning Stephen as he called out: “Lord Jesus, receive my spirit!” v. 60. “Then he knelt down and cried out with a loud voice, ‘Lord, do not charge them with this sin!’ And saying this, he fell asleep.”

Stephen was the first Christian martyr, but he was not the first to pray this prayer. The first to say these words was the Savior Stephen proclaimed. In Luke we read these words:

34 Then Jesus said, “Father, forgive them because they do not know what they are doing.”

Stephen was the first Christian martyr, do you know the second to give his life for the Gospel?