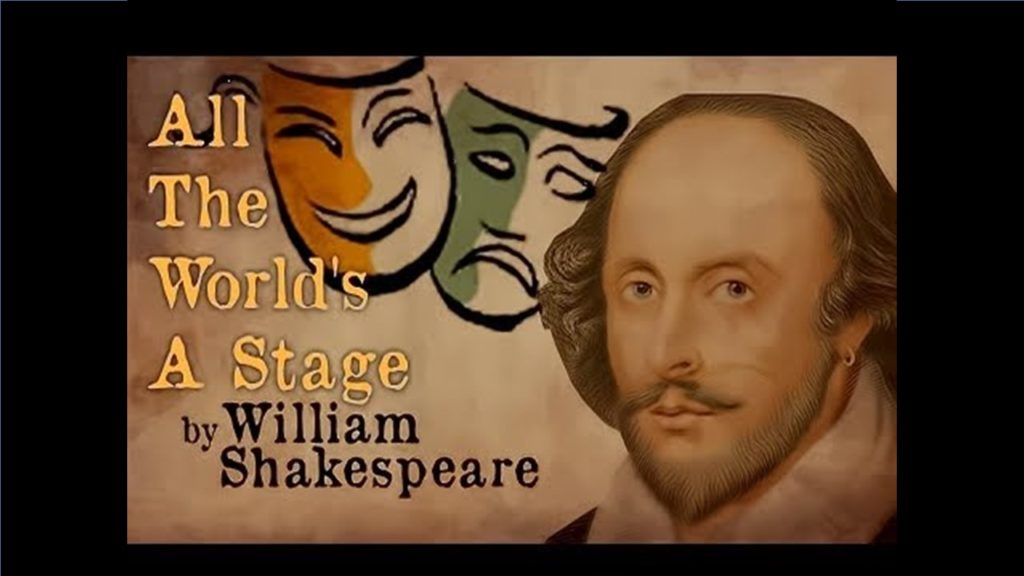 “All the world’s a stage” is the phrase that begins a monologue from William Shakespeare’s As You Like It, spoken by the melancholy Jaques in Act II Scene VII Line 138.

The complete saying is, “All the world’s a stage, And all the men and women merely players; They have their exits and their entrances, And one man in his time plays many parts, His acts being the circle of life.”

The meaning of this phrase is that this world is like a stage show, and all human beings are merely actors.

Hypocrite comes from the Greek word hupokritēs actor. The Dictionary defines a hypocrite as a person who on a false appearance of virtue or religion. A person whose actions belie stated beliefs.

The Bible tells us that a hypocrite is someone who puts on a mask and pretends to be something he is not. The apostle Paul writes in Galatians 6:3, Galatians 6:3, “If anyone thinks they are something when they are not, they deceive themselves.” They are mere actors.

The focal passage (Matthew 6:1-6) emphases Christians are not playing actors on a world stage. We are not to play the role of righteousness for the world’s applause, but for the God who made us.

1 “Be especially careful when you are trying to be good so that you don’t make a performance out of it. It might be good theater, but the God who made you won’t be applauding.

2″When you do something for someone else, don’t call attention to yourself. You’ve seen them in action, I’m sure – ‘play actors’ I call them – treating prayer meeting and street corner alike as a stage, acting compassionate as long as someone is watching, playing to the crowds. They get applause, true, but that’s all they get.

3 When you help someone out, don’t think about how it looks.

4 Just do it – quietly and unobtrusively. That is the way your God, who conceived you in love, working behind the scenes, helps you out.

5 “And when you come before God, don’t turn that into a theatrical production either. All these people making a regular show out of their prayers, hoping for stardom! Do you think God sits in a box seat?

6 “Here’s what I want you to do: Find a quiet, secluded place so you won’t be tempted to role-play before God. Just be there as simply and honestly as you can manage. The focus will shift from you to God, and you will begin to sense his grace.

We aren’t to engage in role-playing. God’s not looking for superstars, He is searching for serving servants. Servants aren’t found on a stage; they are discovered in the fields working.