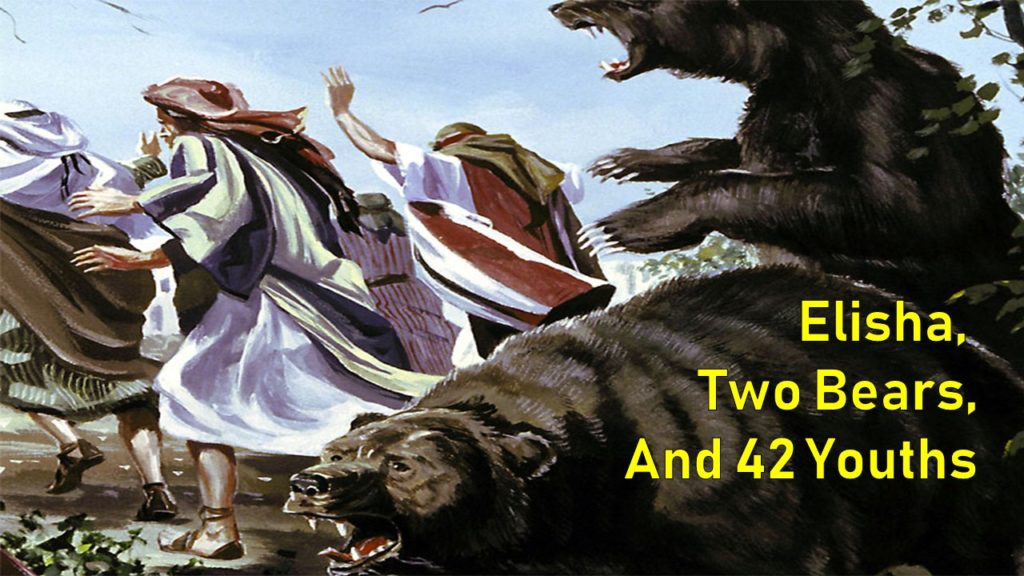 Elisha saw Elijah ascension to heaven in a chariot of fire with horses. He picked up the mantle that had fallen off Elijah and again crosses the Jordan.

23 From there Elisha went up to Bethel. As he was walking up the path, some small boys came out of the city and harassed him, chanting, “Go up, baldy! Go up, baldy!”

These “boys” where rebellious youth in their late teens or earlier twenties, who were raised in Bethel, a city of immoral and licentious, by ungodly parents. They didn’t know God and expressed their disdain for His servant. They challenged Elisha’s office and sarcastically dared him to go up as he claimed Elijah had ascended into heaven. This incident reminds me of the crowds at the foot of the cross demanding Jesus give proof of His divinity by coming down from the cross.   Three days Jesus gave proof of his messiahship, He rose from the grave.

24 He turned around, looked at them, and cursed them in the name of the Lord. Then two female bears came out of the woods and mauled 42 of the children.

Elisha cursed the young men, but God sent the judgment on 42 of the youths for their callous unbelief and disrespect of the man of God. He used two female bears.

A harsh judgment, but God’s message was, and is, don’t interfere with godly men and women carrying out God’s mission.

The contemporaries of Elisha honored him. A younger generation, who did not know God, reproached him. “These mockers represented the irreverence of a generation growing up with increasing contempt for God and His laws.” (NIV Quest Study Bible, comment page 511)

In the past, most Americans honored God; today the majority no longer respects, acknowledge or worship the Lord. When people disrespect God’s message and His power, in due time, God sends the bears. We receive God’s Word; we share God’s Word and leave the bears to Him.