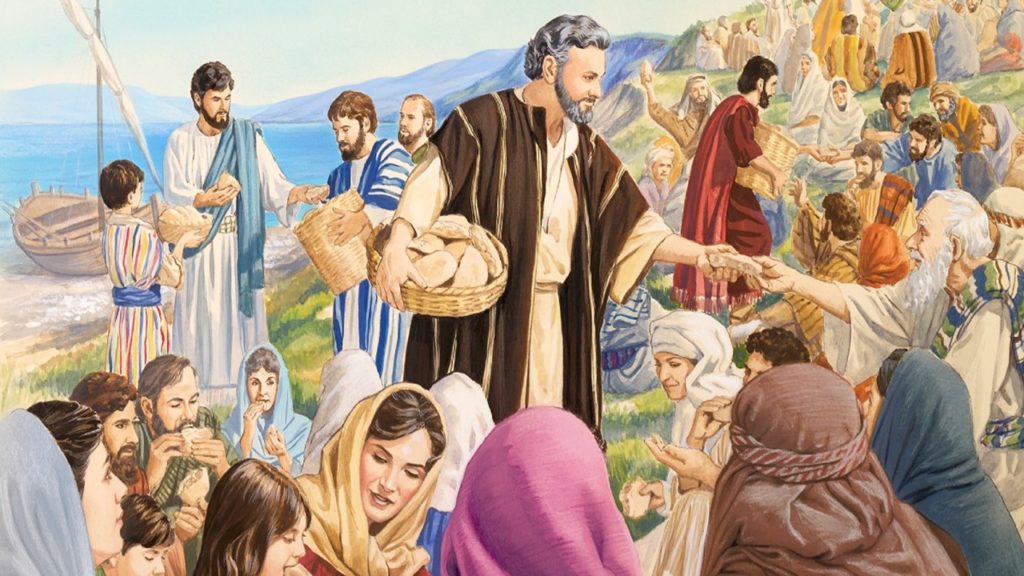 The Bible says 3 So Jesus went up a mountain and sat down there with His disciples.

Upon noticing a large crowd following Him, Jesus asked, “Where will we buy bread so these people can eat?” His disciples offered only an excuse and told Him there was no money to buy bread for the crowd (a perfect response preceding a miracle).

After canvassing the crowd, the disciples found a boy who had five barley loaves and two fish. Their statement, “but what are they for so many?” is another perfect prelude for a miracle.

Jesus had the people sit down. Then, He took the loaves and fish, and after giving thanks, the disciples distributed them so they feed all the people.

The story of the Feeding of the 5,000 is told in all the four Synoptics. But the Apostle John, whom Jesus loved, adds two loving detail the other Synoptic writers omit. First, he reports the five barley loaves and two small fish supplied by a boy Jesus uses to feed 5,000 people. Second the love of a mother providing a meal for her son.

Neither the mother nor the boy received the acclaim that day for their contribution to feeding the 5,000. But they had a story to tell.

Scripture acknowledges the lad was trusting and willing to share his lunch with the crowd and his mother is the behind the scene hero for her mother love providing her son with food for the day and encouraging him to follow Jesus.

Why hadn’t the boy eaten his bread and fish earlier?

How was the boy located among so large of a crowd?

Why was the boy willing to share his meal?

Why was the crowd unprepared for their hunger?

Why were the disciples unaware of Jesus powers?